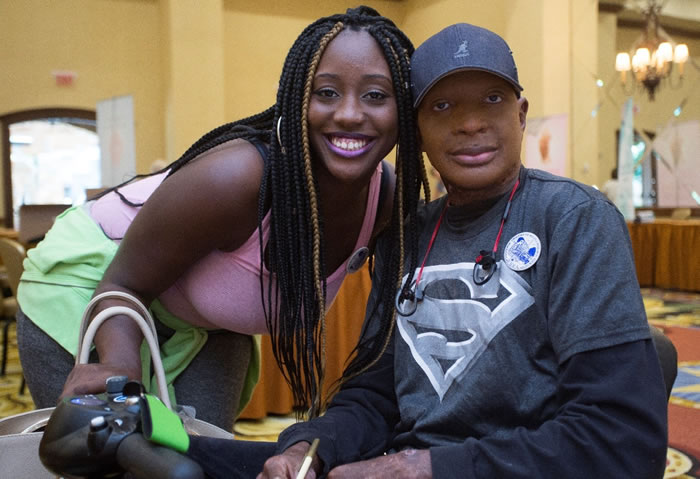 In 1980, when I was only one year old, debra of America’s founder Arlene Pessar helped my mother get a real understanding of EB & everything that was needed for my survival. When I was four, Arlene gave us information that would change our lives forever. She informed my mother that there was a medical convention specializing in dermatology, and that we should attend. We did of course and that is where we met an EB Nurse named Dorothea Caldwell (no relation to me!). She told my mother that she could help us, but there was just one catch - we had to move to New York. As far as my mom was concerned it was a small price.

They did some of the first skin grafting techniques on me, and I got to participate in my first clinical trial, for a new wound care ointment. This ointment was called pseudomonic acid, later renamed Bactroban. And we owe it all to DEBRA. Here is my childhood story.

From Texas to New York

I was five when we traveled to Rockefeller University Hospital in New York. At first my mom wasn't sure how long we would be there. I remember her saying that we might just be there for a month or two. I remember the doctors having a long talk with my mother, and she told me that this was going to be home for a while. Little did we know at the time, this, was an understatement.

All in all, we lived at Rockefeller Hospital for four years. During that time, I was a part of a new technique for skin grafts. Dr. D. Martin Carter, head of EB research became my personal doctor, and friend. You see, my face when I was younger was like one big wound to be honest.

Hodges Caldwell, Jr.My eye lids were drawn up so I never really closed my eyes, I just kind of flipped my eyes in the 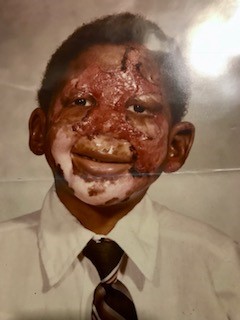 back of head. When I would sleep, I imagined it looked quite strange. My lip was connected to my nose, and my nostrils were constantly try to close, and I had to sleep with these little rubber tubes in my nose so I could breathe while I slept. So needless to say, I needed some work done.

These skin grafts were placed on the damaged area of my face which was basically my whole face, and then my whole head was placed in a device that looked like a football helmet so I wouldn't scratch. My head stayed in that helmet for just shy of six months. I also received reconstructive surgery on my eyes, lips, and nose (to this day I still joke & say I had a nose job).

During all this time at my young age, I was completely aware of what was going on and the benefits of being at a research hospital.

I was constantly curious on how my skin was doing and the protein that my body was missing. I visited the hospital labs often; it was only 3 floors up from where I lived in the hospital.

That’s how I spent my 1st year in New York.

After this first year, my mother was ready to leave. I remember her saying we might be going back home. But Dr. Carter presented my mom with an exciting offer. He asked us to be part of a clinical trial for a new ointment they were working on that they believed would help with the rest of my wounds. The ointment was still in development and the clinical trial would take time. But if successful, it would be a game changer in the quality of life for me and every person with EB after me.

I was happy about the idea of staying; the whole ordeal seemed like some kind of cool adventure. I clearly remember my mom getting into a huge argument with my Mema (grandmother); she felt the city was no place to raise a sick child, but she just didn't understand and how could she? We were doing groundbreaking work, and she was just a concerned mother and grandmother, in Virginia. So, despite her mother's and her husband's (my biological father) advice, we stayed.

My mother also agreed to continue to live at the hospital, but there would have to be some major changes. First, I had to get some kind of schooling. They set me up with a private tutor. Second, even though my mom didn't necessarily have to work because our costs were covered, she wanted a job so some of the nurses referred her to a temp agency, and she was placed right away (it took her a while to figure out the subway). Third, my mom insisted that we have more freedom to come and go as we please. Doctors were not thrilled but the nurses helped that along. And that was my childhood. We lived in the hospital and it was home. It didn't seem strange; it was my normal. People hear that and think I missed out on a childhood, but it was really just the opposite. Yes, I had EB and grew up in a hospital. Yes, most of my friends were adults. But it just made me the person that I am. Since I was 5, I was looking at cells in a microscope, and was learning advanced wound care treatment for free. My mom also took me everywhere, and made me feel as if we were rich but we weren’t. Dr. Carter took me places all the time too. I wouldn't trade my childhood or life for that matter for anything.

We did eventually leave Rockefeller Hospital and New York after four long years, though we came back every summer and I continued to be seen by all my same doctors until I was 16. Sadly, Dr. Carter died from a heart attack that year, at the opera no less. We always use to go the opera together. People are always surprised when I say I love André Bocelli, but I grew up listening to opera. Anyway, I wasn't with him on that day but he was with his wife. I was scheduled to arrive in New York the next week, and I remember he was going to tell us about some exciting new treatments he wanted to try.

Once Dr. Carter died, my spirit was deeply broken. My biological father had left years ago and my mom did remarry to a great man who always accepted me, but in a lot of ways Dr. Carter was a father figure to me. I often imagined that I would go to college at NYU and major in Dermatology and we would find a cure together. But I was never the same, and I think I was depressed. My mom, always there for me, signed me up for Make-A-Wish and my whole family & I traveled to Paris. My little brother Gene, who was only two at the time, seemed to pick up French remarkably fast and the Parisians seemed to really understand what he was saying. Overall it was a great trip, but I knew this was my last big event, and I was going to just live a regular life. 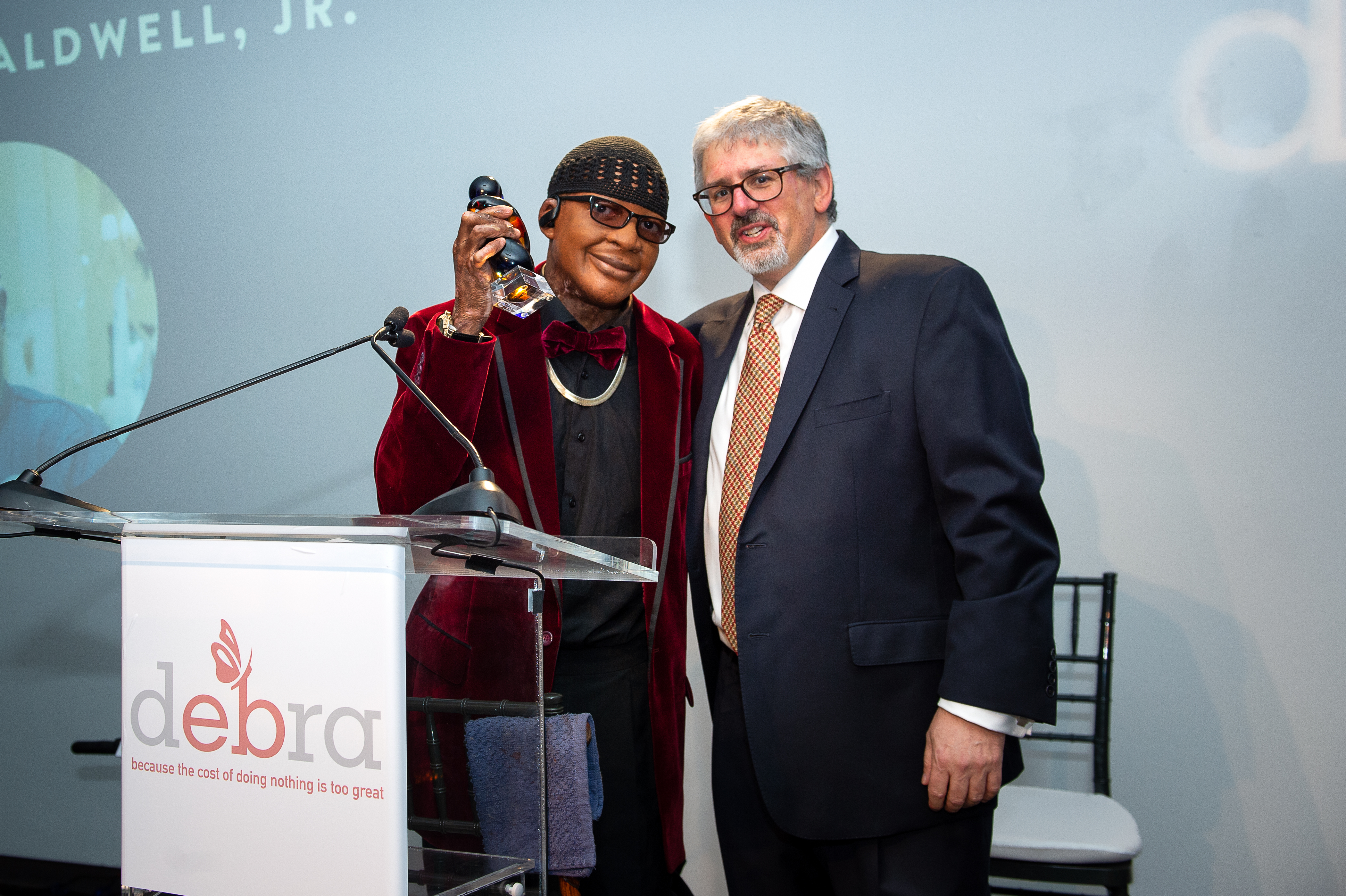 That was long ago, and I am now living my life in Norfolk, VA and spend my days laughing with my sister, binge watching Netflix and am self-employed as a Notary Public. My advice to EB children is that this disease is hard but we are strong because people without EB, even our parents or people that care for us the most, will never fully understand. I want to encourage everyone one with EB to live life to the fullest - don't let it stop you from doing whatever you want to do. Yes, you will have to make modifications and maybe jump though a few extra hurdles to accomplish your goals, but that is what makes us stronger than the rest, and makes it just that much more worth it.

To parents & caregivers, never take "no" or "impossible" for an answer. Always fight because no one else will. And treat your child as normal as possible; it only makes us stronger.

*Thank you Mom & Padre for that*

Hodges was honored with the Spirit Award at the 21st Annual debra of America Benefit.

© Copyright 2020, debra of America, All Rights Reserved | The Dystrophic Epidermolysis Bullosa Research Association of America, d/b/a debra of America is a registered 501(c)(3) tax exempt organization. | All Trademarks and Brands are Property of Their Respective Owners. debra of America does not endorse any drugs, tests, or treatments that we may report. This website is for informational purposes, always check with your physician before adopting any medical treatment. | EIN: 11-2519726