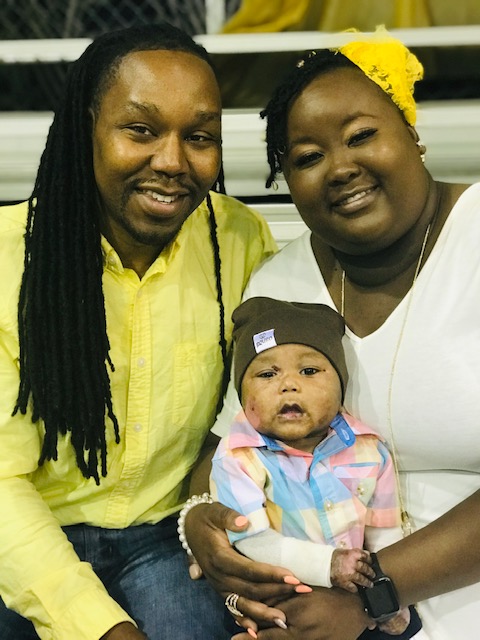 Travis and LaKeisha Walker are in Mississippi. Chance was our only child and he was 21 months.

Well Chance was a fertility baby; we were told that I would never be able to conceive. We tried for 8 years and after several treatments, operations, and prayer we conceived Chance. I was considered high risk due to the infertility issues and my age. I also have severe PCOS and endometriosis. So, I had to see two doctors my entire pregnancy. They induced my labor because my blood pressure was extremely high that day. The birth went fine. We did not know Chance had EB prior to birth. We have so many sonogram photos, but they do not detect if there is a skin issue.

Chance was born October 2018 at 11:57 am at University of Mississippi Medical Center. The birth was great. I had an awesome doctor and nurse team. There were no complications for me until 3 days later. Due to the preeclampsia, I was going into heart failure and almost died. I had to be rushed to the ER to the trauma room.

I remember when he was born. They wrapped him up and sat him on my chest. At that moment, I did not know that he was missing so much skin. Travis saw it but he did not say anything. He thought that it was something birth related. I remember when they took him away, I heard the team saying skin, skin, skin.  I did not know what EB was. Travis said that he told me about Chance having no skin, but I do not remember. I remember two days later Travis took me to the NICU and he was laying there wrapped up in bandages and I was confused. I just started to cry because we could not hold him.  We did not get to hold him until two weeks later. Can you imagine how we felt? Trying for 8 years and we could not hold him. I cried every day and night. We finally got to hold him, and we had so much covering on us. We had to wear masks, gloves, gowns just to hold him. We were scared that he would not know us.

No, the doctors had no idea what to do neither did his NICU nurses. So, there was no sleep for me, I felt uncomfortable leaving him there and they had no idea what was going on.  They referred us to Cincinnati Children’s Hospital.  Chance was born in October and on November 8th we were sent to Ohio and we flew back home December 7th and we finally were able to bring him home December 12th. Ohio has a wonderful EB team there. We constantly stay in communication. Chance has a wonderful pediatrician here in MS that is willing to go over and beyond for hi 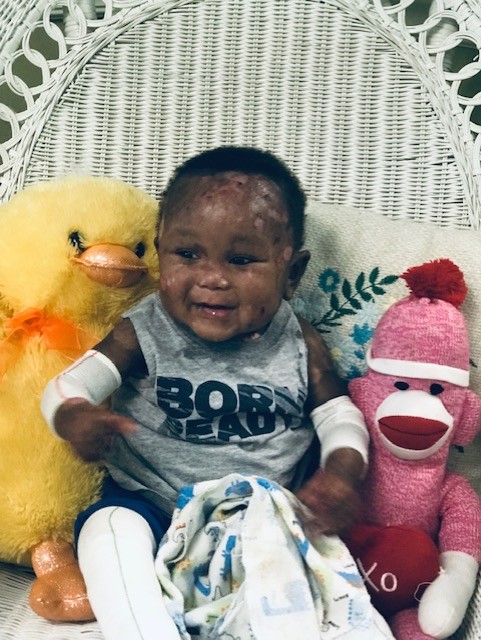 m to have the best care.

Chance has RDEB which stands for Recessive Dystrophic Epidermolysis Bullosa which is a more severe type. Chance was born with webbed toes on both feet. No skin knee down and no skin on the back of his hands. They did a biopsy to determine he had EB and the type he had. EB has severely affected Chance. He is terrified of everyone and overly cautious when doing anything. Chance would have been two in October and he was still not walking.

EB had stopped him from walking. He could barely stand on his legs because his knees are still the worst part of his body.  Chance was open to so many infections and stuff due to this condition. Chance could not take regular baths. He is terrified of water due to the pain from baths. Chance has a G-Tube. He would not take food orally. He used to take baby puree food, but he completely stopped. Chance had therapy twice a week (PT/OT) and multiple appointments. Chance loved to be outside but due to the heat and humidity he can not be outside and play like normal children. He must stay in the house most of the day because the heat will cause him to blister and his wounds to sweat.

EB affected Chance in so many ways. He wanted to be able to get up and play like normal children, but he couldn’t. He heard water and started to shake. We could not carry or pick him up like a normal child. We must be careful on how we dress him. He must be bandaged all day. Any type of friction caused blistering and we have to fight blisters. We just place Aquaphor in his diapers to help with friction and we use mineral oil and cotton balls instead of baby wipes. Chance is also terrified when he sees anyone wearing scrubs.

The flare-ups WOW. He has been through so much in his little time so far.

While in the NICU at UMMC, Travis was holding Chance’s hand and Chance stopped breathing. He had set up an infection. They moved him to the private room in the NICU to keep him safe from infections.

While in Ohio a day after G-Tube surgery the nurse was showing us how to properly place a pad around the G-Tube and she accidently cut the tube. The fellow came to the bedside and tried to replace the tube. While she was replacing his tube, I noticed the pink spots in his face where now white. He was going into shock and stopped breathing because she had gone past his stomach and into his intestines. 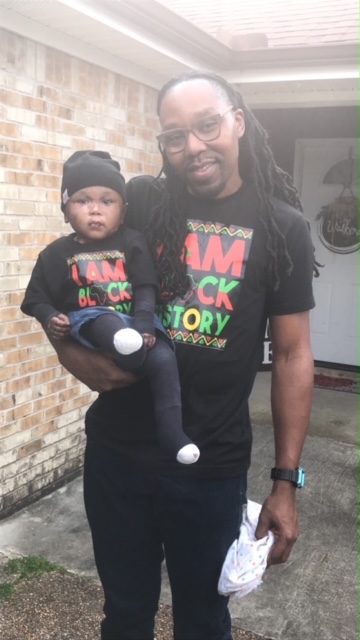 January 1, 2019, Chance completely stopped breathing and we had to perform CPR on him until the AMR got him. They had to perform CPR on him 3 times on the way to hospital. Chance had to be intubated. We did not know why Chance had stopped breathing and nor did the doctors at UMMC. We contacted Ohio and searched the EB FB groups and found out that Chance had recently had a throat blister that caused his throat to close from inflammation. On New Years Eve, we had just got finished feeding Chance and raised him up to burp him and blood started running out of his mouth a ton of it. It scared us half to death. Throat blisters, mouth blisters, narrowing of the throat are common with RDEB. He was hospitalized for 10 days. A couple of weeks later he had another one and I refused the tub and he just wore the mask to help keep his throat open. Chance has had throat blisters every three months of his life. I started to look at the dates and Travis noticed it also. Just last year in March, Chance fever spiked up to 103.5 and then dropped to 94.3. They ordered blood work and told us to rush him back in after the got the results because he was setting up septic in his system. They did not know where it came from. He was on some extraordinarily strong antibiotics that made him sick, but he had to have them. He fought through that!!

Chance had 7 near death experiences. We cherished everyday with him. We have been through so much. Especially Chance, he is true Champ/Warrior.

Travis and I try to stay strong facing EB. We battled with Chance itching nightly we wake up to blood and skin. We must battle Chance pain at night. Sometimes he would wake up screaming and hitting his legs because they hurt.

We would get crazy stares all the time. We have been confronted by people asking what we did to him, has he been burned and more. Sometimes when someone else has an infant they will make sure their child does not come near Chance because they think he is contagious. It hurts all three of us because sometimes we are treated as outcasts. When we are out eating, people stare at us and whisper because I know they are wondering why we are not feeding but he does not eat. We get stares when we feed him people are shocked when they see all the stuff like the syringes and tubes. I am about to cry thinking about it now.People mainly think he has been burned or sometimes think he has eczema. I hate the stares I would rather them ask. 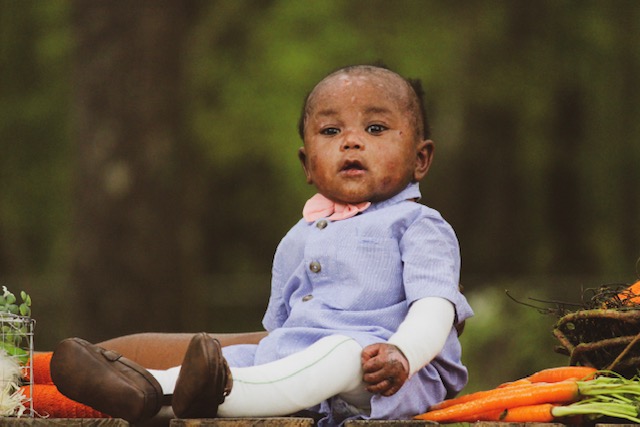 was tired. He suffered from a blister episode that Thursday and he was raspy for a few days and that Sunday Chance started gagging and it happened so fast. I did CPR and I ran with him In my arms to the neighbors house. They talked to the Emergency people while I kept doing CPR. I knew I was losing him.  He passed away from aspiration. His esophagus tissue went down into his airway. The last thing I said to him was Mommy love you I am always here. Travis was visiting family that day. This day still tortures me mentally because I feel like a failure. They tried everything to get him back. We still suffer daily from losing him. We created his FB page Chance the Champ a while back to bring awareness of this condition. Everyone thought we would do the usual. Get steroids and make sure he is ok and they send us home. But this time was different.

Chance was a beautiful child. He was so smart and always smiling like nothing bothered him. We miss him so much and I know hate is a strong word but we hate EB and the pain it causes and the loved ones It takes.

We know he is pain free that is what keeps us going but I want him back.

I would tell anyone suffering or assisting someone with EB to stay strong. Remember that you are doing your best at the moment. Always believe in yourself and that you are beautiful and your scars are your beauty marks.