Like many of you, my husband, Matt, and I had never heard of Epidermolysis Bullosa (EB). That is, not until February 27, 2009 when our son, Jonah, was born. Jonah was born missing the skin on his elbows, hands, and from his knees down. He was dotted with blisters and lesions all over his body, but his limbs were the worst, by far. We were terrified. None of the doctors knew what was wrong. He was whisked away to our local children’s hospital, where it was determined within 24 hours that he had EB. WE did not hold him and barely even touched him for nine days. When we did get to “hold” him, we held a pillow that he was lying on. Our contact with him was minimal in those first weeks. He was in such terrible shape.

Learning that Jonah would have to suffer through something as horrible as EB was the second blow we had endured within a year. In April of 2008, we had lost our first son, Gabriel, full-term. He was stillborn, and although his skin was pulled back on his hands and feet, we were told that this could sometimes happen when babies die in utero. After an autopsy and general genetic testing, we were told that there was no apparent reason for his death. With Jonah’s birth, our questions about losing Gabe were answered. Unfortunately, the answer was Epidermolysis Bullosa. Not an easy pill to swallow.

The doctors were predicting the worst for Jonah, solely based on the percentage of skin that was missing and how deep his wounds were. They told us we would be in the NICU for a minimum of two months, but I think many thought he would never come home. A few weeks later, we learned that he had the Junctional subtype. We were told that he could not be categorized as Herlitz or non-Herlitz, we would just have to wait and see. Wait and see? Wait and see?! There were moments I felt like I was waiting for him to die. Every new milestone was bittersweet. “Hang on to this memory, Patrice. You may not get to see this again.” Or “Enjoy this vacation, Patrice. He may not be here next year.” It’s a terrifying way to live.

But I remember a few comments I received on my blog from the EB Community that gave me hope, even in those first days. I got comments from Janel, who has RDEB, is in her thirties, married, with a daughter of her own. She said something like, “EB is not the death sentence the doctors make it out to be” and other encouraging words. There were comments from Adrienne, mother of Caroline, who has Junctional, and is infection free and thriving at age four. There was Zack, a five-year-old, with RDEB, who was playing soccer and t-ball and telling people he got in a fight with a T-Rex. Story after story after story of people LIVING with EB. And we found debra of America and Nurse Geri (or they found us, rather) and sweet Bill at National Rehab, and all of a sudden, it felt like we could do this. We could LIVE with this.

And THAT is what we will instill in Jonah, no matter how how long or short his time here on Earth may be. He is not dying. He is not JUST surviving. He is not sitting around waiting to get an infection. Jonah will be LIVING. If anything, the reality of Epidermolysis Bullosa has given us a new perspective on life. As cliché as it sounds, none of us know how long we have here, and we are determined that our family will LIVE. We’ve already missed out on an earthly lifetime with our sweet Gabe. There is NO WAY that we are going to miss out on Jonah’s time by worrying about the “what if’s.” 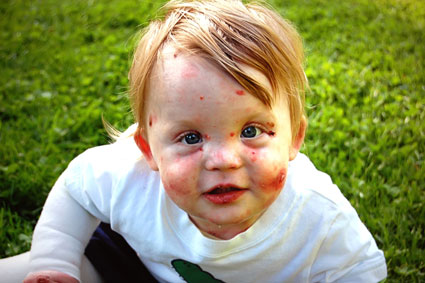 Don’t get me wrong. There are days that are completely overwhelming and days where we (well, I, at least) totally lose perspective. The risk of infection, the bandage changes, the tube feedings, the therapies, the doctors’ appointments. Sometimes it feels like too much. But then, Jonah giggles or learns something new or snuggles up against me, and it takes my breath away. And in those moments (which FAR outnumber the tough times), I know, beyond a shadow of a doubt, that Jonah is more than anything I could have asked for. He has taught me so much in his short 16 months here on Earth. He is strong, resilient, hilarious, AMAZING. Jonah is my hero, and I wouldn’t trade him for all of the “healthy” kids in all the world.